VIGNETTE AND POSTER MADE FOR THE 33th INTERNATIONAL FILM FESTIVAL

OSGEMEOS were invited to create the main invitation image for the festival which brought together the theme of graffiti which could be seen in the German film "Art Inconsequence". Many other important artists have worked with the festival in the past, including Japanese painter and naturalized Brazilian, Tomie Otake, in 2008 . OSGEMEOS used frames and rolls of film as the basis for their creation, and included some reoccuring imagery such as fireworks and colorful prints.

VIGNETTE AND POSTER MADE FOR THE 33th INTERNATIONAL FILM FESTIVAL 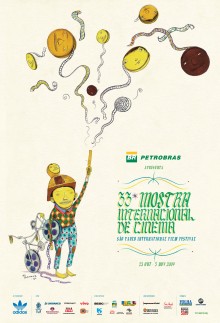