This Giant was created due to the collaboration between OSGEMEOS and Plasticiens Volants, a group located in the southwest of France, that produces giant inflatable puppets and balloons. These giant characters have flown in various urban spaces and have been used to tell the most beautiful stories. OSGEMEOS first contact with Plasticiens Volants happened through an invitation to participate in the Cultura Nova Festival in Heerlen, Netherlands. The curator of the festival introduced them to the group and together they had the idea for a project in their hometown. In November 2009, the Anhangabaú Valley in São Paulo became the scene of the tale of the “O Estrangeiro” (Portuguese for The Foreigner), with the central character being a giant of 20 meters high, created by OSGEMEOS. This same character was painted on the side of one of the buildings at the site. In the story, the Foreigner is lost in a strange place and, with the help of other characters, he is introduced into a world full of adventures and lessons. This piece was part of a larger cultural program of SESC SP, which celebrated the Year of France in Brazil. The most exciting part, for OSGEMEOS, was to see the reaction of the public as the Giant from the wall became three-dimensional and interacted with them magically. 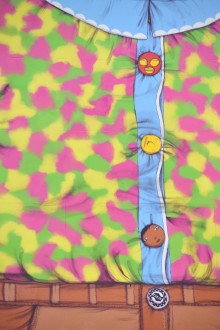 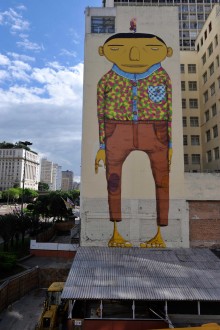