From 11:57pm to midnight each night in August, was presented an animation of OSGEMEOS' characters, in the middle of one of the most urban and emblematic places in the world: Times Square, NY.
"Parallel Connection" is the title of this project that was part of the "Midnight Moment Project" presented by The Times Square Advertising Coalition (TSAC) and curated by Times Square Arts. Presented in partnership with Lehmann Maupin and production by Birdo Studio.
On its traditional billboards and newsstands, Times Square during three minutes has become a digital open-sky art gallery.
Through that moment, OSGEMEOS established a conversation between the physical world and the imagination, connecting people with joyful and magical aspects of their characters. 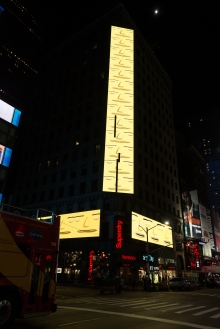